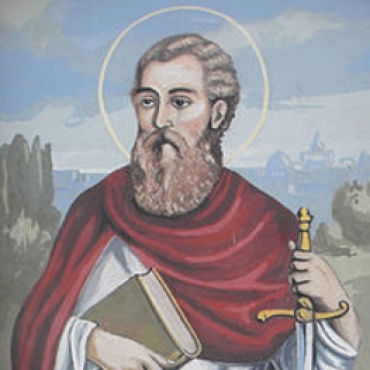 Saint Paul is undoubtedly one of the most important figures in the history of Christianity. Famously converted on the road to Damascus, he travelled tens of thousands of miles around the Mediterranean spreading the word of Jesus.

The writings of Saint Paul are some of the earliest Christian documents that we have, thirteen of the twenty-seven books of the Bible are written by him. The one thing most people know about Saint Paul is that he underwent a dramatic conversion on the road to Damascus. Reading Paul’s letters and Acts of the Apostles we learn that Paul was born in Tarsus, in modern day Eastern Turkey; he was a tent maker by trade, was an avid student under the top Jewish teacher in Jerusalem and was also a Roman citizen.

Paul wrote some of the most beautiful and important passages in the whole of the Bible. He was the first great Christian theologian, establishing some of the building blocks of the faith that we now take for granted. In his letters, we also discover the Paul who writes warmly of his friends, both men and women, the Paul who frets about how the members of his churches are coping without him and who defends their status as true converts and the Paul who appeals for the freedom of a slave.

Paul called himself the apostle of the Gentiles (people who were not Jews) and he preached the Good News of Jesus to them. That took him to the far ends of the world. Because of Paul, we too, have received the Christian faith. He died around the age of 67, during Nero’s terrible torture of the Christians. We celebrate Paul’s conversion on January 25th and his joint feast day with Saint Peter on June 29th.